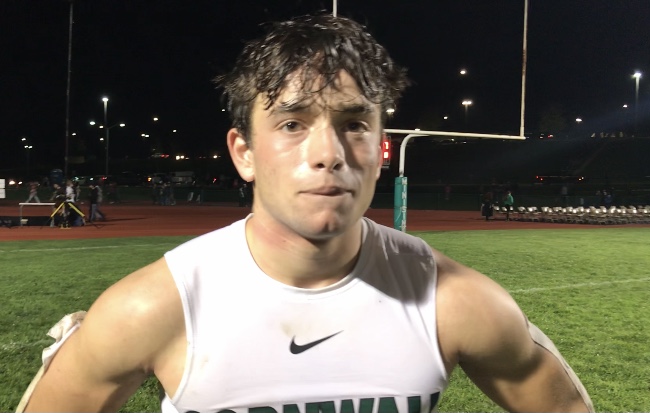 Slate Hill – Derek Marrero walked off the field under his own power to cheers from Cornwall football fans.

Trainers were working out leg cramps that Marrero experienced after running a deep route.

One Cornwall fan yelled, “You’ve earned the rest,” to Marrero as he reached the sideline.

Marrero was on the receiving end of two game-changing plays in undefeated Cornwall’s 27-7 win over Minisink Valley in a rematch of the Section 9 Class A championship.

Cornwall quarterback Dan Breheny connected with Marrero on a beautiful pass down the sideline for 48 yards late in the second quarter. Tommy Faller scored the second of his three touchdowns runs from 13 yards out in the next play to give Cornwall a 14-7 halftime lead.

Coming out the break, Marrero made a tackler miss and finished a 30-yard touchdown pass from Breheny.

“Dan and I have a great connection,” Marrero said. “We’ve been working ever since last year, getting the timing down and getting the routes down. We work hard at practice and work hard off the field. It was huge today. He threw great balls. I was able to make some catches and they were really a turning point in the game.”

Breheny completed 10-of-22 passes for 167 yards. Four of the completions went to Marrero for 87 yards. Faller rushed 14 times for 69 yards and the three touchdowns.

“Derek’s fast,” Breheny said. “He’s athletic and I can throw any jump ball up to him. Anytime I have a matchup with him one-on-on, I’m taking it all day.

“We went in at halftime and we just knew what we had to do. Coach (Ryan Baldock) put together a game plan for the second half and we executed it.”

Cornwall (6-0), the state’s No. 4 Class A team, struck first on Faller’s 20-yard run with 9:06 left in the first quarter. Minisink Valley answered with a 4-yard touchdown run from Ethan Gallo (80 rushing yards) on its next drive. The Warriors (3-3) had a chance to take the lead in the second quarter but Clayton Fogler missed a 40-yard field goal.

“It’s a huge win,” Marrero said. “They are a great team. They’ve been our competition since they moved down to Class A. We’ve always had battles and to get a win on their home field 27-7 like that in the beginning of league play, it’s big for the playoffs. It’s big for our team. It’s a huge ‘W.’”

“Our kids were able to adjust and make the adjustments that coach (defensive coordinator Rich) Ward made,” Baldock said. “They were just playing with an edge and attitude now that makes them tough to move the ball on consistently, just because they are completely dialed into the scheme.”