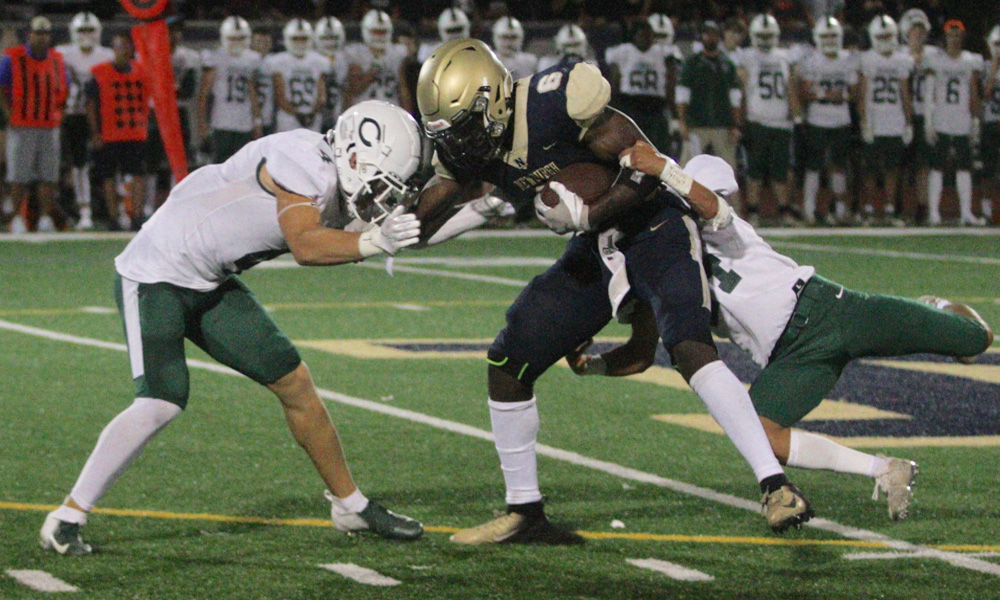 With one of the more anticipated games of the Section 9 football season hanging in the balance, Cyrus Yarpezeshkan found an opening in the middle of the field.

Cornwall trailed Newburgh Free Academy by one point with 1:45 left and Yarpezeshkan’s 57-yard catch would be the scoring.

Dan Breheny delivered the pass to Yarpezeshkan to give Cornwall a 5-point lead, 18-13. The score did not change during the remainder of quarter as the Green Dragons ruined the Goldbacks’ home opener.

“It was amazing,” said Yarpezeshkan. “The coach game-planned it, and we knew it was going to be open. And when the right time came, we executed it.”

A field goal gave Cornwall a 3-0 lead at the end of the first quarter, and the second pick help set up Andre Hedgemond’s 5-yard touchdown catch in the second quarter to make it 10-0.

Newburgh, though, had plenty to fight for when Emmanuel Williams scored with a 15-yard touchdown reception from Iorlano to cut Cornwall’s lead to 10-7. And with less than 30 seconds left in the first half, Eric Duncan carried it into the nd zone from 2 yards out to give Newburgh a 13-10 lead at the half.

The momentum the Goldbacks tried to carry into the second half was undone when Deondre Johnson could not handle the snap during a punt attempt with his back to the end zone with 7:59 left in the third quarter. He and the ball would eventually end up there, and Cornwall earned a safety to cut Newburgh lead to 13-12.

Newburgh never found way to get back on the board, but Yarpeseshkan and Breheny did to end Newburgh’s plan to win at home.

“It’s a tremendous win for this program,” Cornwall coach Ryan Baldock said. “I am just happy how my guys handled the adversity. They never quit. They never back down. They just competing, just kept fighting, and we found a way to win.”

Cornwall had three interceptions and held Newburgh top receiver Deondre Johnson to one catch for one yard.