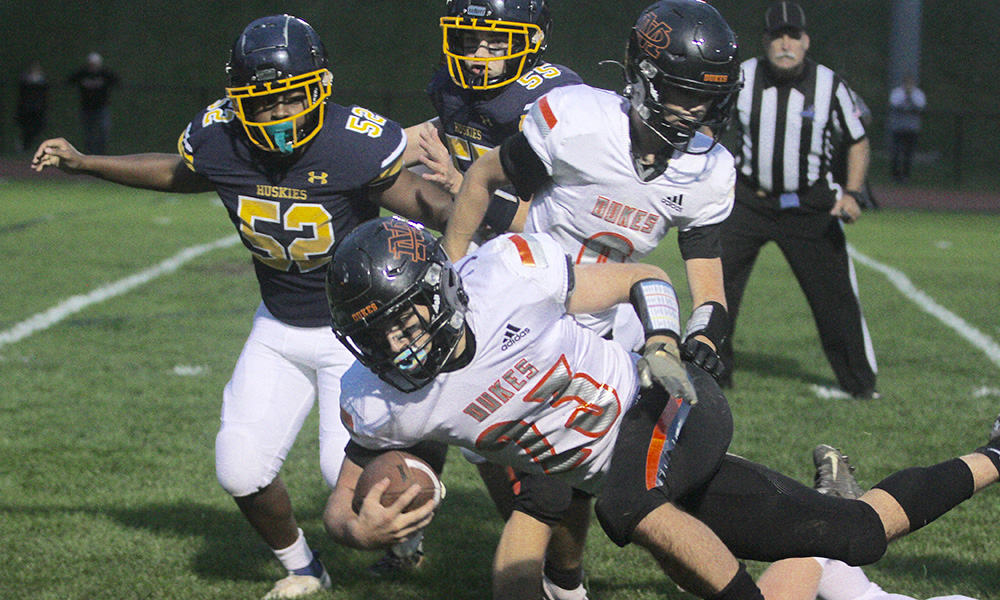 Highland set the tone early against visiting Marlboro and held the ball for most of the first half, and the Huskies led 7-6 at the half.

The Dukes deferred the kick-off for the second half, and used that advantage within the first minute when Dylan O’Banks, Jr hit Drew Heimink with a 58-yard touchdown catch.

“We knew we had to stop them from getting first downs in the second half, and we did that,” said O’Banks, Jr.  “We came out and basically scored on every drive.”

The Dukes had three possessions the first half, and O’Banks Jr connected with Zyquan Jackson with a 12-yard touchdown catch very late in the second quarter to shift the momentum in the Dukes’ favor.

A little more than a minute after Marlboro took the lead early in the third quarter, Aden Wiser, the Huskies’ quarterback, fumbled on Highland’s 26-yard line. The Dukes recovered the ball, and O’Banks Jr, rushed into the end zone from there to make it 20-7.

A few minutes later, Matt Drake carried the ball in from 2-yards out to make it 27-7 for the Dukes.

Highland regained possession, and O’Banks Jr, picked off Wiser and brought ball back deep into Dukes’ territory. The Dukes’ quarterback then scored from 3 yards out to make it 33-7 at the end of the third quarter.

Marlboro again went to work early, and Dominick Rosso scored on a 32-yard touchdown run to make it 40-7 with 11:02 left in the fourth quarter. Highland’s Taki Bakatsias scored with a 3-yard touchdown catch to make 40-14, but the Dukes added a field goal late in the game to complete the rout and second half comeback.

“You could get what their game plan was, and it was to hold the ball,” said Ryan Brooks, Marlboro’s coach. “Fortunately our defense locked them down in the second half.”

Marlboro improved to 6-1, and they finish the regular season next week against Burke before getting ready for the postseason.

Brooks said his team has had its inconsistencies this season, but Friday the Dukes play to the potential their coach was seeking.

“Tonight, in the second half, it definitely showed,” said Brooks. “We definitely had a balanced attack running the ball and passing the ball tonight.”