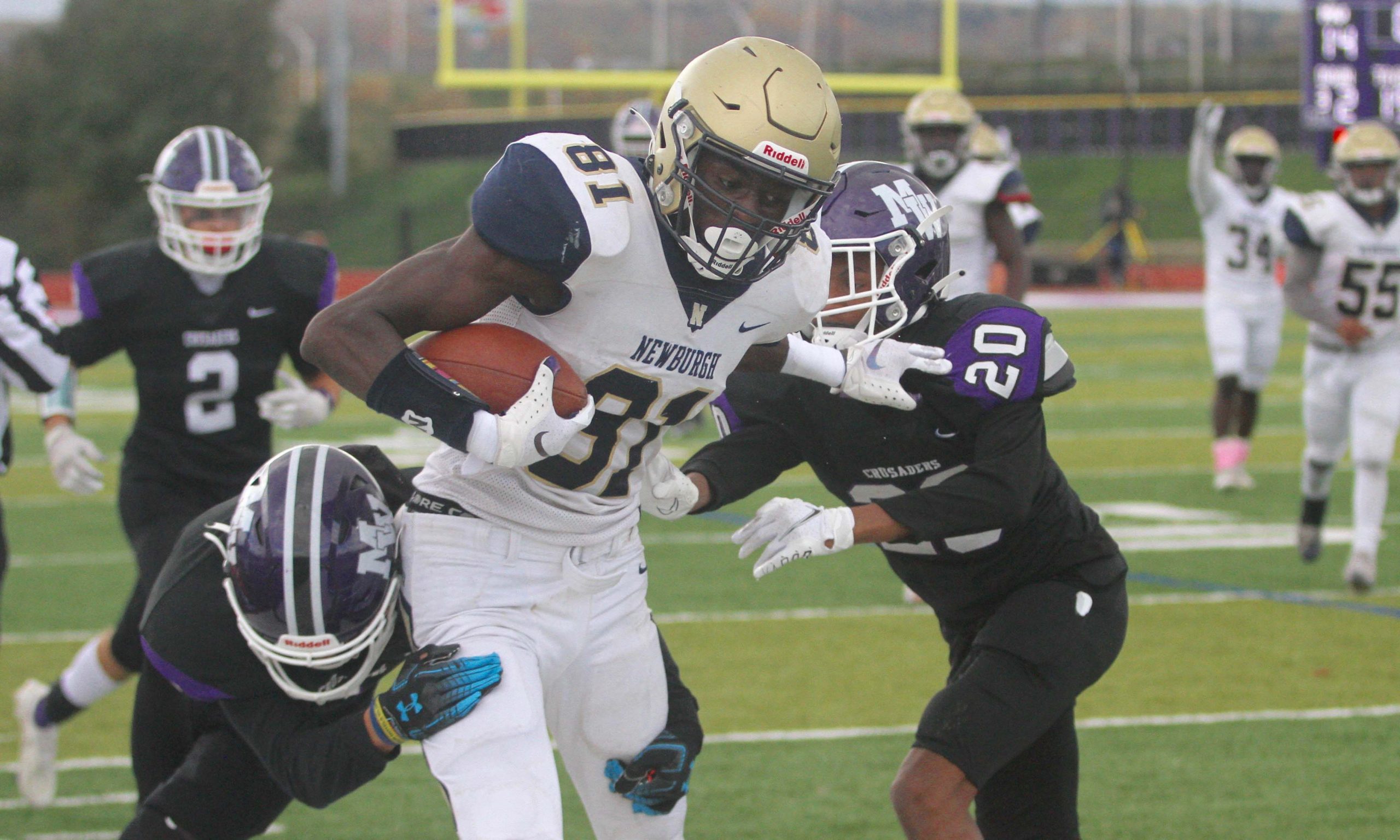 Monroe-Woodbury controlled the line of scrimmage well this season, and that allowed the Crusader offense to run the ball and keep the clock on their side.

But, that strategy reached its limit Saturday against visiting Newburgh Free Academy in one of the top Section 9, Class AA clashes this season.

It was tied 14-14 through the end of the third quarter before Newburgh’s Eric Duncan scored two rushing touchdowns, on 12-yard and 19-yard runs, in the fourth quarter to give his team a 27-14 victory and the top seed next weekend to start the Section 9 playoffs.

The Crusaders took the game’s opening kick-off and kept ball for more than five minutes before missing a 26-yard field goal. That misfortune, however, was negated when Duncan fumbled on Newburgh’s 28-yard line. Mike Zrelak, the Crusaders quarterback, used that mistake to eventually score from 6 yards with a rushing touchdown to give his team a 7-0 lead at the end of the first quarter.

Newburgh was driving down field and was a yard away from a score when the first quarter ended, but three seconds into the second quarter, Sam Okeyo took the ball in to tie it at 7-7.

With some momentum, the Crusaders’ defense went to work and picked off Dylan Iorlano’s pass on Newburgh’s 35-yard line. The interception set up a 34-yard run by Eryk Shammgod to give the Crusaders a 14-7 lead with 6:13 left in the second quarter.

Less than two minutes later, though, Iorlano made up for his mistake when he connected with Deondre Johnson on a 58-yard touchdown reception to make it 14-14 at the half.

After the break, the Goldbacks stopped making mistakes and controlled the line of scrimmage to keep the home team scoreless and return as the top seed in the postseason next week.

“We knew we had to take care of the ball. We had two turnovers in the first half, and it’s hard to win when you have turnovers,” said Bill Bianco, Newburgh’s coach. “We took care of ball better in the second half, we weren’t on the field with our defense the whole time.”

The Goldbacks finished the regular season 7-1, and the Crusaders finished 5-3 to begin the postseason.