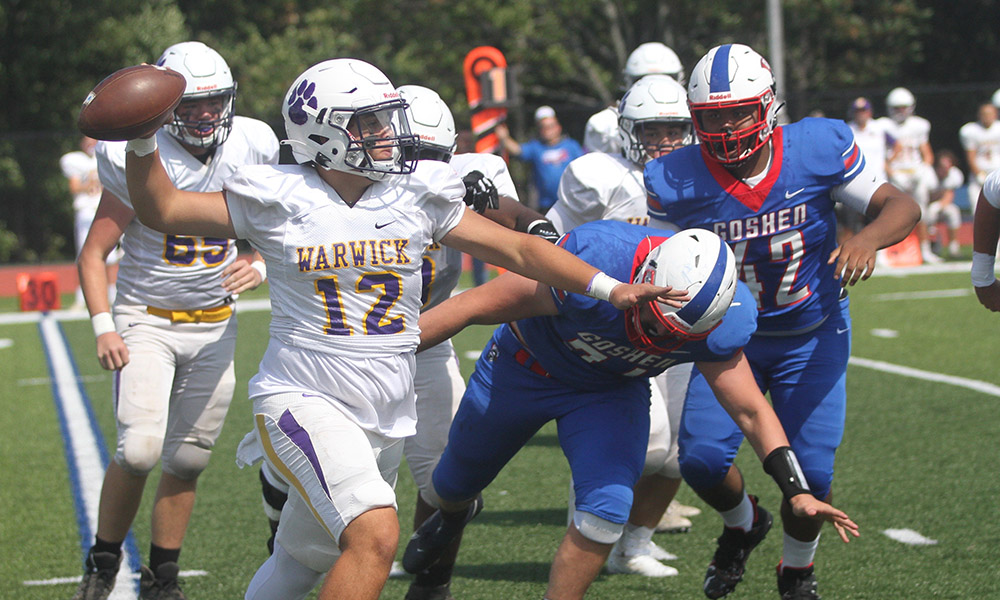 Their rivalry dates back to 1896, and it’s the second oldest in New York state.

And they have a reward for their victory, the Spirit Trophy, in which Goshen has kept following the last three meetings leading up to Saturday’s game during the Gladiators’ season opener at home.

The Wildcats scored another touchdown in the fourth quarter when Daniel Thorson carried the ball 35 yards in for score to give Warwick a 20-7 victory.

“We have a 220-pound superstar quarterback that can run and throw it,” said Greg Sirico, Warwick’s coach, “so we’re coming at you.”

Goshen controlled the ball in the first half by converting seven fourth downs to keep the ball out of DiMarco’s hands.

But when he had it, he made the most of it like when he connected with Ryan McLaughlin on a 67-yard touchdown pass with 1:18 left in the first quarter to give Warwick a 7-0 lead.

Goshen’s ball control offense worked in the second quarter when Michael Flores ran it home from 26 yards out to tie it 7-7 with 2:11 left in the half.

Warwick, though, did not make any defensive adjustments in the second half as the offense took control of the game

“We played,” said Sirico, whose team improved to 2-0. “We felt they couldn’t keep doing that the way they did. We trust our guys.”

And, DiMarco took that comfort to control the middle of the field with his third quarter keepers – which made the difference in the game.

“It felt good. All the confidence was through the roof,” he said. “I got the ball and just ran hard.”

PHOTOS: Warwick vs Goshen
PODCAST: Newburgh vs Cornwall Game of The Week Preview