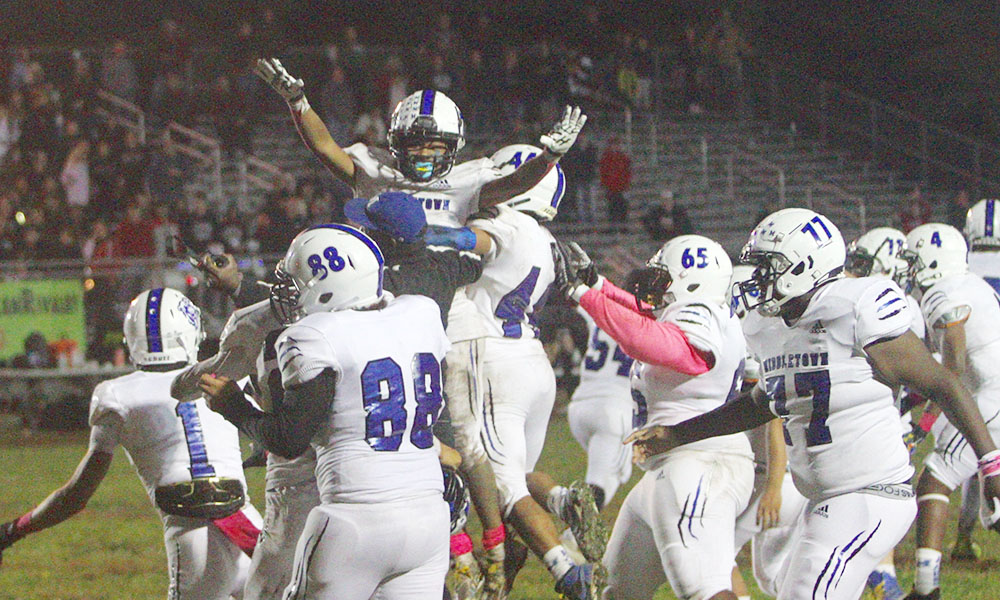 When Angel Ortiz scored on a 30-yard run down the sideline for Middletown in the annual Erie Bell game with 2:20 left in the fourth quarter in Port Jervis, he gave the Middie Bears a 34-20 lead.

It seemed like a comfortable lead, but it wasn’t. Port Jervis went to work, and quarterback Brett Fuller scored on a 16-yard run with 1:16 left in the quarter to cut the lead to 34-27.

Port Jervis won the onsides kick, and Fuller completed a long pass to Middletown’s 28-yard line. He then hit Geffen Cauthen with a 5-yard touchdown reception to shave Middletown’s lead to 34-33.

But the two-point conversion, which would have given Port Jervis a one-point lead failed when Fuller was stopped on a run into the end zone with 12 seconds left in the game.

The Middles kept the lead, finally stopping Port Jervis during their 143rd meeting.

“I didn’t think it was over,” said Ortiz, after his long touchdown run late in the fourth quarter. “I knew they came to play. We had to execute, we had to fight back, and that’s what we did.”

And, Ortiz was playing defense when they stopped Fuller’s two-point attempt, after which his team stormed the field to celebrate with 12 seconds still on the clock.

“That felt great,” he said. “They were driving on us. That was scary.”

Middletown, a Class AA school, reclaimed the Erie Bell. Port Jervis, a Class B school, has gained possession of the trophy with a 14-7 win during the 2021 spring season.

“It’s 11-on-11 football, it doesn’t matter,” said Tim Strenfel, Middletown’s coach. “Our guys were able to finish today, and that’s what it is all about.”

Ortiz, the game MVP, had 14 carries for 129 yards and scored three touchdowns for Middletown. He gave Middletown a 7-0 in the first quarter with a 10-yard run and then tied it 13-13 with a 1-yard run with 1:38 left in the second quarter. In the third quarter, he scored on 2-yard run to make it 20-13 as Port Jervis continued to pressure Middletown throughout the second half.

After Middletown’s Josh Soter (10 carries for 68 yards and two touchdowns) took the ball in from a yard out to make it 26-13 early in the fourth quarter, Port Jervis’ Jacob Balmos pulled down a 15-yard touchdown catch to cut the lead to 26-20 with 7:10 left in the quarter.

And, the suspense did not end until the Middies denied that two-point conversion that would have given Port Jervis, which took the trophy in the recent spring meeting, a one-point lead with seconds left in the game.

“It’s always circled (on the calendar) every single year,” Strenfel, of this game. “This is definitely the game for the community.”