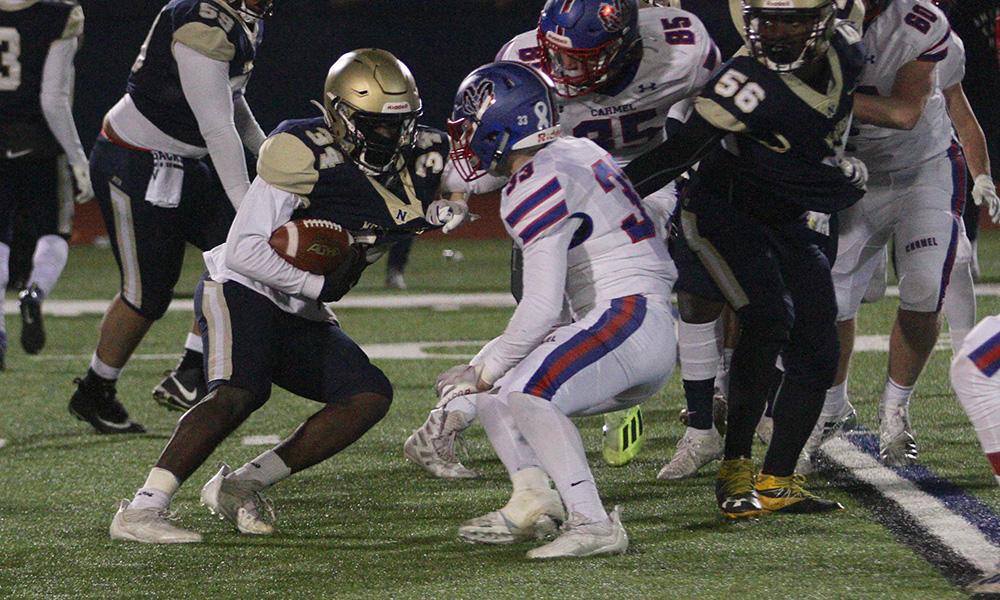 Newburgh’s Deondre Johnson scored on a 68-yard pass reception in the first quarter against Carmel, the Section 1 champions, during the state Class AA semis, and he scored in the fourth quarter for the defense when the ball was stripped after scooping it up.

But those touchdowns were the bookends of a Carmel rout after they knocked off the Goldbacks 47-13 to advance to the state final in Syracuse next weekend.

“It was just us, we hurt ourselves,” said Johnson, blaming his team for the season ending loss. “We just have to come out better next time.”

Newburgh led 7-0 at the end of the first quarter before Carmel started to dominate with its speed, leading 28-7 at the half with a pair of rushing touchdowns by Josh Massi and Dylan Shields and passing touchdowns by Nick Dileo and TJ Fusco to start the rout.

Carmel’s Matt Risely made it 34-7 when tore though the middle of the Goldbacks’ defense with a 55-yard rushing touchdown with 10:30 left in the third quarter, and ending any hope Newburgh could contain their opponents.

“We got off to a good start. We had the big pass play,” said Bill Bianco, Newburgh’s coach.

And Bianco knew what expect from Carmel – even though his team could do little to stop or even slow them.

“We have tons of film on them,” he said. “We knew they were really good. I am not surprised by it.”