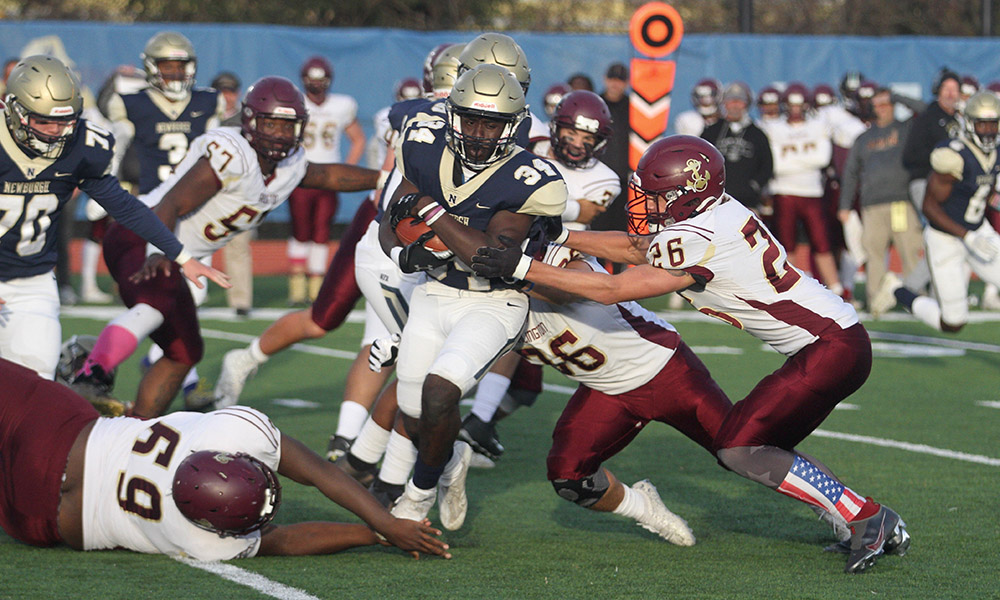 Newburgh was locked in a tie against Arlington during the Class AA regional semis with less than minute left in regulation Saturday when Goldbacks freshman quarterback Mason Hoover put up a pass toward the corner of the end zone, hoping Deondre Johnson would catch it.

Johnson did not catch the pass as Arlington picked it off and nullified Eric Duncan’s effort when he moved the ball into scoring position to give the Goldbacks a chance to win in regulation.

“I’m pretty stupid for throwing the ball there,” said Bill Bianco, Newburgh’s coach, of his bad play call. “We shouldn’t have done that.”

The game went to overtime and Duncan was able to make a difference when he scored from 3 yards out to give Newburgh a 35-28 lead. Arlington then scored from the 20–yard line, but instead of tying the game with an extra point, the Admirals went for a winning two-point conversion that failed, and Newburgh won 35-34.

“I am glad the guys picked me up,” said Bianco.

Hoover never played varsity football until he took over for an injured Dylan Iorlano a few weeks ago. He connected with Johnson on a 35-yard touchdown catch with 10:34 left in the fourth quarter to tie it 28-28.

Duncan fumbled early in the game, and that set up a score by Arlington’s Aidan Chaffee.  But down 7-0, Duncan came back with a 7-yard touchdown run to tie it 7-7.

Johnson gave Newburgh a 14-7 lead with a 28-yard touchdown catch with 10 minutes left in the second quarter before Chaffee tied for Arlington with a 2-yard run to the end zone.

The first half ended 21-21. The teams played a scoreless third quarter before the suspense ended in the fourth quarter and Duncan was able to power the Goldbacks to the east final, Saturday Nov. 27 in Middletown.

“Everything was rushing through me like I couldn’t feel it,” said Duncan after scoring  in overtime.

And he had little doubt of the outcome.

“Of course, I believe this moment,” Duncan said in the noisy locker room after the game. ”Before the game even started, I was like, ‘We’re going to win this game.’”