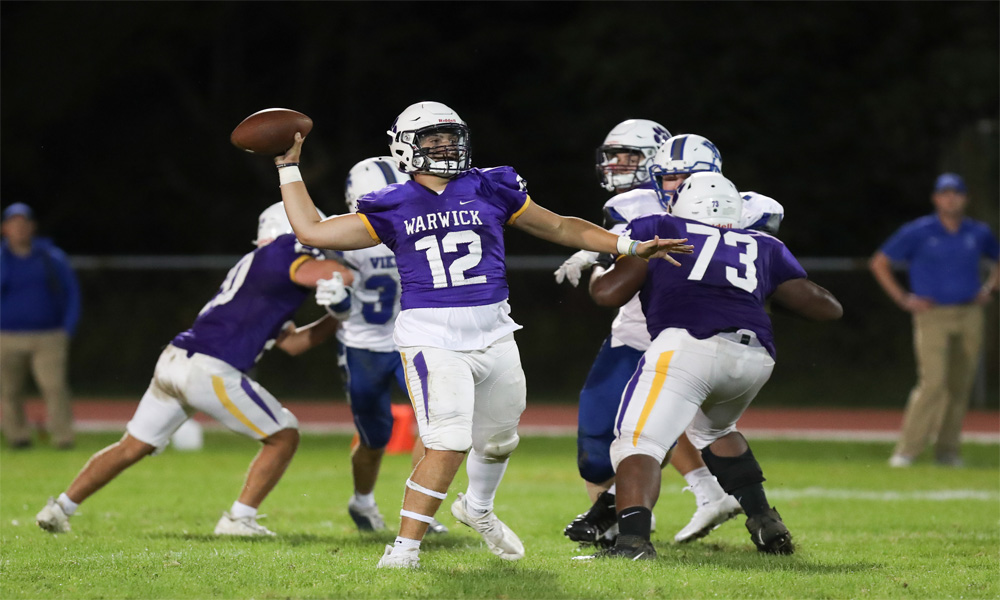 There was no hesitation as Nick DiMarco caught the snap and fired a pass deep downfield.

Warwick’s season opener was hanging in the balance on third-down play from midfield with less than 90 seconds left.

Ryan McLaughlin made a clutch catch with two Valley Central defenders in the area for a 36-yard gain. A couple kneel down later, Warwick celebrated a hard-fought 25-20 home victory.

DiMarco rushed for two touchdowns and threw another to McLaughlin and Dan Thorson returned the opening kickoff of the second half 78 yards to the house for the Wildcats (1-0).

“The first half was rough but the second half we started picking it up and we started firing on all cylinders and we balled out,” DiMarco said.

One of Warwick coaches was yelling to Thorsen to let the kickoff go as it looked like it could bounced out of bounds. At the last second, Thorsen was instructed to pick up the ball. He worked his way from left the right and down the sideline for a huge special teams play.

“I saw no opening on the left side,” Thorsen said. “I saw a couple of guys on the right and I juked them out and just had an open lane into the end zone. It’s a great win. We played after 10 practices. We are still working on some chemistry but this win really shows that we can play as a team.”

Thorson missed the 2021 spring football season after injuring his collarbone in 7-on-7.

“I’m so happy for him,” Warwick coach Greg Sirico said. “It’s great to have him back in football. What a great impact with him coming back and breaking that touchdown. I’m very proud of him.”

Schools had the option to play a regular season Week “0” over a second scrimmage this season. Warwick and Valley Central both chose to play and gave fans an entertaining game.

Valley Central’s first two touchdown drives totaled two plays. Dan Latimer scored from 10 yards out following a long kickoff return by Elijah Bellinger. Bellinger scored from four yards out after Valley Central took over after a muffed Warwick punt. He picked off DiMarco in the end zone near the end of the third quarter and added a 31-yard touchdown run and two-point conversion to cut Warwick’s lead to five with 2:40 left.

“We felt like we wanted to give our kids a chance to play a game,” Sirico said on the decison to forego a second scrimmage. “It all worked out for Valley Central and Warwick and we were just fortunate to come out on the winning side.”