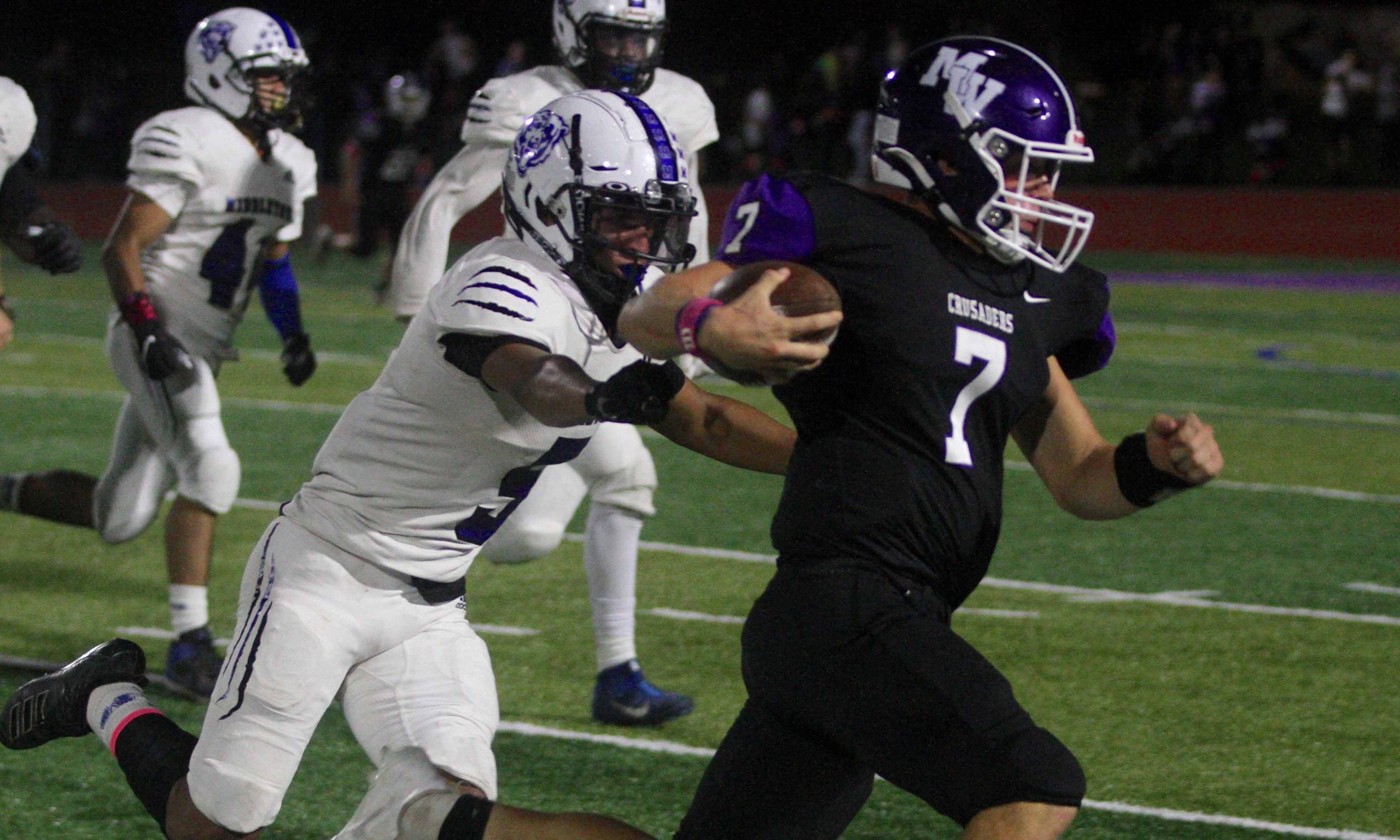 Monroe –Woodbury played its first home game of the season Friday, and it was homecoming against Middletown.

And it was the first home game for the Crusaders since playing in Section 9, Class AA championship against Middletown April 23, in which the Middie Bears took home the sectional title after Monroe missed a field goal to tie the game.

on a stretcher in Kingston with a spinal injury in the back of his head.

Coulanges tied it 7-7 with a 23-yard touchdown run late in the second quarter. The Crusaders never trailed again after that touchdown while holding off the Middie Bears to win 26-21.

“I had to come back for the homecoming game,” said Coulanges. “We feel really great. This is a team effort.”

After a scoreless first quarter, Middletown’s Jaden Farrell scored on fourth down from four yards out in the second quarter to give his team a 7-0 lead.

After Coulanges tied it, Farrell, passing off the ball on an option play, turned it into a fumble recovery for the Crusaders before Monroe’s Mike Zrelak took a quarterback keeper from a yard out to make it 14-7 with 30 seconds left in the half.

The Crusaders took the kick-off in the second half, and on their first offensive play from scrimmage fumbled the ball on their own 37-yard line. Farrell then connected with Leon McKiver on a 15-yard touchdown reception to tie it 14-14 with 10:13 left in the third quarter.

Matteo Severo then scored from three yards out with 3:52 left in the third quarter to give Monroe a 20-14 lead.  And Eryk Shammgod made it 26-14 with a 1-yard touchdown run with 8:53 left in the fourth.

Farrell helped his team battle back when he connected again with McKiver on a 7-yard touchdown catch with 4:16 left in the fourth quarter to cut the Crusader lead to 26-21. Middletown had the ball late in the game around midfield, but a Crusader interception ended any hope for a comeback.

“They have two very, very athletic, lanky and tall receivers, and a quarterback who throws a ball down the field,” said James Sciarra, Monroe’s coach.

As the postseason looms, the game had the intensity of a playoff game, and Sciarra said his team expected that coming into the contest.

“We knew going into this week the setting for the postseason depended on the next three games,” said Sciarra. “It was pretty special for these guys.”

Photos from the game can be seen here: http://845sportsnation.com/photos-monroe-woodbury-vs-middletown/