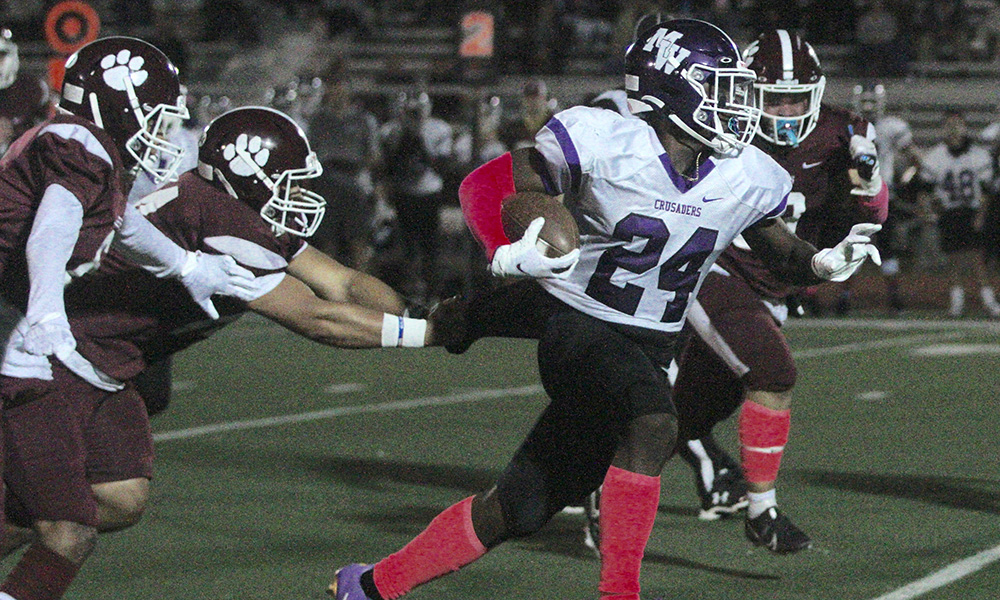 Monroe-Woodbury’s quarterback, Mike Zrelak, used to be a running back, and against Kingston Friday, he made two passing attempts, completing one of those.

“If the run is working,” said Zrelak, a senior, “there is no reason to go to it.”

Zrelak made the right reads against the Tigers’ defense on senior night at Dietz Stadium, and he scored three rushing touchdowns in the 27-0 victory as his offense controlled the line of scrimmage all night.

“Our whole game plan, our offense is based on controlling the line of scrimmage,” said James Sciarra, Monroe’s coach, after his team improved 3-2. “My offensive line played pretty well.”

After Jayden Coulanges put the Crusaders up 7-0 in the first quarter with a 3-yard run into the end zone, Zrelak took over the running chores and scored from a yard out in the second quarter to make it 14-0.

The clock was under a minute heading into the half when Zrelak took the ball from Kingston’s 30-yard line and raced to the 2-yard line. He scored from there with 33 seconds left in the second quarter to give his team a 21-0 lead at the half.

As the defense gave Kingston little running room, the Crusaders’ offensive line continued to dominate, and Zrelak stayed behind them to score on a 6-yard run in the fourth quarter for the Crusaders’ last touchdown.

“The line is obviously great. I can’t do anything without them,” he said. “That’s where the offense starts. If they don’t preform, we don’t preform.”  Kingston dropped 3-3 despite fighting hard against the visitors in the shutout.