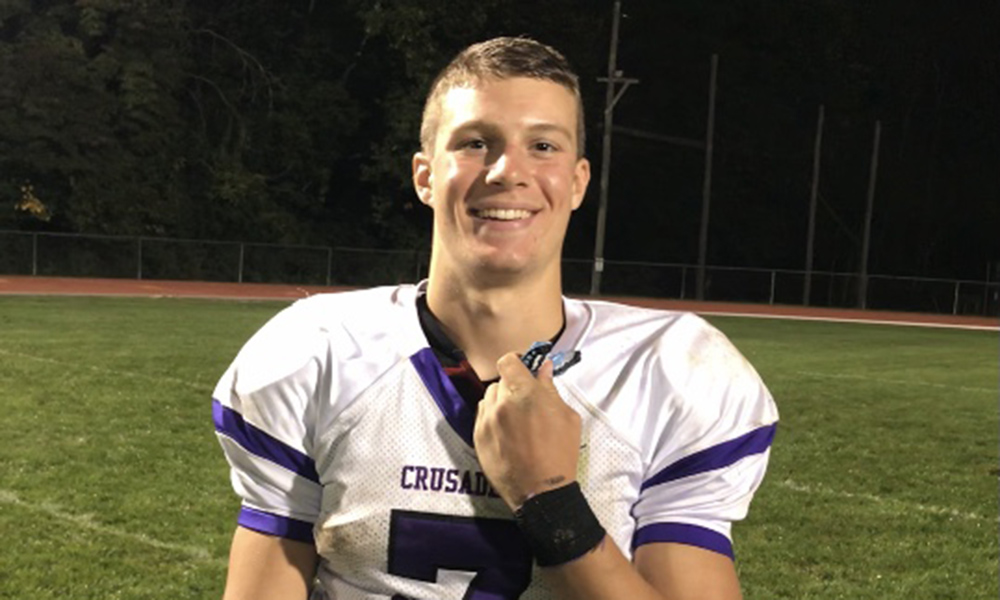 The triple option, the scheme that Zrelak runs as Monroe-Woodbury quarterback, is a beautiful offense to watch when all three components are working in unison. Monroe-Woodbury received production for quarterback keepers, fullback plays and slotback runs in a 49-14 victory over previously undefeated Warwick.

Monroe-Woodbury set the tempo on its opening possession, which also featured a 38-yard pass to slotback James Mastropolo. Zrelak finished the drive with his first of three touchdown runs from 15 yards out. The senior rushed for 107 yards on 10 carries.

Fullback Jayden Coulanges added 113 yards on 12 carries and a 36-yard touchdown run. Mastropolo, who had 27 rushing yards, scored from 13 yards out in the first quarter for Monroe-Woodbury (1-2, 1-0 Class AA).

The Crusaders bounced back after setbacks to some strong competition in Cornwall and Corning.

“We had a tough first couple of opponents,” said Zrelak, who added 70 passing yards. “After three weeks of running the same offense, we fixed the little mistakes and that’s what this offense is all about, fixing the little mistakes because when everything comes together we are a really good football team.”

Monroe-Woodbury’s defense and special teams were also cooking. Connor Fitzgibbon picked off Warwick quarterback Nick DiMarco. The Crusaders blocked two punts and one extra point. Two rushers combined on the first block that led to Monroe-Woodbury’s second touchdown. Nic Scancarello blocked a punt that was picked up by Mike Rowe and returned 46 yards for a score in the second quarter. Fitzgibbon also had a 88-yard kick return that led to another Monroe-Woodbury touchdown.

Fitzgibbon helped Monroe-Woodbury hold DiMarco, who ignited Warwick’s 3-0 start with his passing and running game, to one touchdown through the air. DiMarco connected with Justin Hurd for 53-yard score to cut Monroe-Woodbury’s lead to 21-6 with 9:37 left in the second quarter.

“We’ve been practicing all week because we know DiMarco has a great arm,” said Fitzgibbon, who now has four interceptions on the season. “The offense is basically based on passing. We’ve been working on that all week. The DBs (defensive backs) got to get over their routes because he can go really deep. He has some really talented receivers. You just have to make plays on the ball.”

Andrew Pichardo blocked an extra points and added a sack and Sean Clermont closed Monroe-Woodbury’s scoring with a 6-yard run.

“This win is huge for us,” Zrelak said. “It’s our first conference game. It brings the team together chemistry wise. We were a little frustrated and kind of shooting ourselves in the foot the first two weeks. We pulled it together. The chemistry is looking good and the boys are all pumped up.”