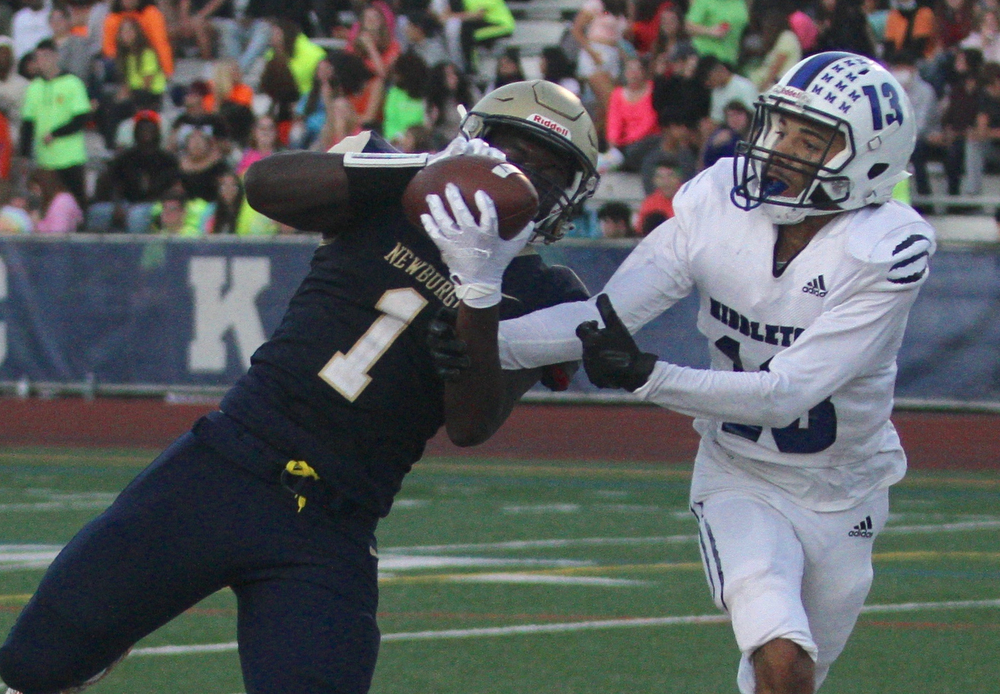 A week after Cornwall spoiled Newburgh Free Academy home opener with a stingy defense that kept the offense un-settled, the Goldbacks were able Friday to find some rhythm against Middletown.

With a little under four minutes into the first quarter, Dylan Iorlano connected with Emmanuel Williams on a 79-yard touchdown reception for the first of three scores through the air to stop the Middies 19-14.

“We had a great week of practice, and we were confident coming into this game,” said Iorlano.

Middletown repeated Newburgh’s long play with one of their own when Jaden Farrell hit Jermaine McCray with a 78-yard touchdown pass with 5:42 left in the second quarter to give the visitors a 7-6 lead.

The lead lasted until the final second of the first half when Iorlano hooked up with Sam Okeyo with a 5-yard touchdown catch to put the Goldbacks up 12-7.

Deondre Johnson managed to stay inbounds in the corner of the end zone for a 19-yard touchdown reception with 9:19 left in the fourth quarter and increase Newburgh’s lead to 19-7.

That lead looked comfortable as Newburgh sought its first home victory of the season. But Farrell kept pushing his team, and he had a long run that set up his team’s final score with a 33-yard touchdown pass to Leon McKiver.

Newburgh survived that scare to win after a tough loss to Cornwall, which followed a road victory to open the season at Minisink – after not making the playoffs during the spring season six months ago.

“It’s quite a ringer of teams to play,” said Bill Bianco, Newburgh’s coach, “so hopefully it helped us somewhat.”

And Friday’s victory reversed that disappointing loss to Cornwall, whose defense forced Iorlano to throw a pair of interceptions that were turned into scores.

“We cleaned up some of the protection stuff,” said Bianco, “we worked on that this week.”